Today is a special day, everybody—today is the first day in a month that I have had both the motivation and the ability to type away on the ol’ blogger. More on that later.
First, you may have noticed my new banner at the top of the page.  I'm pretty proud of that, so if you could just take a moment and think to yourself, "Wow, Chad really worked hard on that a couple weeks ago and then didn't type squat to accompany it," I'd appreciate it.
I'd like to say that I've been super busy and just haven't had the time to type, but that would be lying.  I've had tons of time, but had a serious case of writer's block.
After our team presentation in Minneapolis, I was back in the cold and windy Fort Collins for about 10 days (or exactly the amount of time for me to stop noticing the thinner air) before I was off to Oxnard, CA for team camp.
The men's team was staying in a big beach house with lots of bunk beds, so we'd certainly get to know each other over the course of the 10-day camp.  After staying at multiple host-houses for races last year, I know what the kitchen situation can become with a bunch of racers.  So when I learned the housing situation for camp, my first thought was 16 guys....how many refrigerators? Just the one, it turns out.  Keep in mind, it's not just 16 guys and one kitchen and refrigerator, it's 16 bike racers that need to take in 5, 6, 7, sometimes 8 thousand calories a day just to maintain weight. We tried to limit our food purchases that had to be kept cold, and the rest of the house became the pantry.  Food was tucked into every nook and cranny of that house.  The fridge exploded every time it was opened. In fact, I'm amazed anything stayed cold because the fridge door certainly didn't close once during camp.
The rest of camp is a blur.  I got into a rhythm of waking up at 6:30 to beat the kitchen rush, stuffing my face for 2 hours before climbing on the bike, riding, more eating, massage every couple of days from our amazing soigneur Amanda, more eating, watch a rented movie with the team, go to bed.  As camp went on, I found myself crawling into bed earlier and earlier.
The riding was awesome, with tons of climbing.  I was upset to not have a power meter, because I knew I was setting power records even despite getting dropped towards the top of climbs by our better climbers. Climbing means descending, though, and I was loving every chance to hone my descending skills.  You may remember my string of bad luck last fall, so I was still learning to trust tires again.  By the end of camp, I was back to my old self on descents.
In 9 days, we logged something like 30 hours of riding--600 miles--and tens of thousands of feet of climbing.
All we had left was the VIP ride and then our team drag-race up Gibraltar mountain.  On the VIP ride, we had the whole men's team, the whole women's team, and a dozen or so others from the cycling industry/sponsors and team staff.  We had about 15 minutes left in the ride when it happened.
The whole group was riding 2x2 along the shoulder of the Pacific Coast Highway, zipping along down a hill.  We were all having a good time socializing and the rock just didn't get pointed out quickly enough.  I was standing up about halfway back in the group, looking ahead for any debris or holes that could cause trouble.  Suddenly I was bucked into the air, and my hands lost the handlebars.  I came down and managed to tuck my shoulder before impact.  I tumbled a few times before coming to rest in a sitting position, watching my bike continue flipping a couple more times, trying to figure out what happened.
I looked at my left hand, covered in blood from the large chunk of skin I'd just removed.  My arms, knees, and ankles were scraped.  I looked at my left shoulder and saw that there was nothing left of my jersey.  Mike Creed came up to me and said, "let's check that collarbone."  I shrugged my shoulders and raised my arms--test passed--sigh of relief.  I took my helmet off, as I remembered hitting my head, and saw that the back was crushed and cracked.  It did its job!
I was helped to my feet and walked back to the team car, where I climbed in for the ride home.  I saw behind the car a big rock.  Well, that explains it.  The next couple of hours involved a lot of chewing on my armwarmer while Amanda scrubbed my wounds and peeled my jersey off.  Then I had to take a shower.  All of the wounds hurt, but my back and shoulder were basically a low-grade burn, and that was especially excruciating.
After we got the wounds dressed, I was off to the hospital to have my wrist x-rayed. A couple hours later, I was relieved to hear the technician report an "unremarkable left wrist".  All I had to endure after that was the oozing of my wounds through bandages onto my clothes as I waited for them to heal.
To end this post on a positive note, I've saved the highlight of the camp for last.  Day 8 was time-trial day.  The directors had picked out a 10k out-and-back course on rolling terrain.  Dino from HED was out to watch us from the car while we raced to see what position we're in when we're hurting.  I had one goal: win.  Nevermind that we have Zirbel and Zwizanski on the team, I was jonesin' for that W. 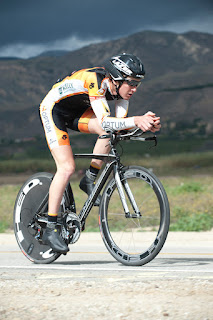 We only had two sets of race wheels and a few helmets, so we were supposed to climb off our bikes as soon as we finished so that the wheels and helmet could be passed on to the next set of riders to start.  I finished my time trial, feeling as you should when you've finished a time trial, and immediately got off the bike.  Well, on day 8 of camp, my legs were not happy with the sudden change in activity and began to tighten quickly.  I just needed a bike to spin around on.  Jelly, our mechanic, was putting another set of wheels on my bike so I could ride, but my helmet was back in the van.
As I set off in my post-time-trial stupor for my helmet, I heard the results called out to me: "Chad, you beat Zirbel by 17 seconds." I had set the fastest time of the day.  So to add to my post-race haze, I was now on cloud nine.  I opened the van door, grabbed my helmet, and shared the news of underdog triumph with Zirbel, who was sitting inside, "Hey Zirbel, I gotcha!" Ha, ha.
Two hours later, Tom Soladay said, "Dude, what you said in the van was hilarious, we were laughing for half an hour!"
"Uh, what?" I didn't recall making any jokes.  I was horrified to find out what I'd actually done.
I suppose I should tell you here that it was rainy and cold that day.  When we weren't doing our time trial, we were warming up and staying dry in the van.  Remember my story of underdog triumph?  Well, here's what I actually did: I opened the door to the van containing all of my teammates, looked Zirbel square in the face and said, "Hey Zirbel, looks like I beat you." Then I shut the door and walked off.
Bajadali offered me an Arrogant Bastard Ale that night, but I was too busy still trying to pull both feet out of my mouth.
Next up: Merco Cycling Classic. If you don't see it in the next couple days, call me out!
Posted by Chad at 10:41 AM